From the Spyro Wiki, the Spyro and Skylanders encyclopedia
Revision as of 19:20, October 18, 2021 by Results May Vary (talk | contribs) (parentheses for alt names (although preferably wouldn't))
(diff) ← Older revision | Latest revision (diff) | Newer revision → (diff)
Jump to navigationJump to search 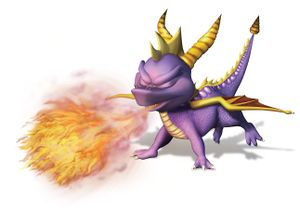 Artwork of Spyro using his flame attack from Spyro: Season of Ice

This article is about Spyro's signature ability. For the character in Spyro: A Hero's Tail, see Flame (character).

Flame (also named Flame Breath, Fire, or flame attack) is one of Spyro's signature abilities. He uses it in nearly all of his appearances since Spyro the Dragon. Breathing flame allows Spyro to burn enemies and certain objects, such as Baskets or basic Treasure Chests, and defeat fodder. In Spyro 2: Ripto's Rage! and Spyro: Year of the Dragon, there is a temporary power-up named Superflame, which serves as a stronger variant of the Flame ability.

In Spyro: Enter the Dragonfly, Spyro can acquire different types of breaths along his journey, but his Flame Breath remains his standard one.

In Spyro 2: Season of Flame, Spyro and the dragons lost their ability to breathe fire when the Rhynocs stole the fireflies from the Dragon Realms. Because of this, Spyro can only breathe ice during the start of the game. He goes on a journey to recover the missing fireflies. In the first stage, Country Farms, Bianca uses a magic spell to grant Spyro his flame breath back, although Spyro still retains his ice-breathing ability and can willingly alternate between it and his flame breath throughout his journey.

In Spyro: A Hero's Tail, like in Spyro: Enter the Dragonfly, Spyro can acquire and use different breaths besides Flame.