From the Spyro Wiki, the Spyro and Skylanders encyclopedia
(Redirected from Dragon Realm)
Jump to navigationJump to search 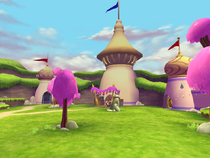 The entirety of Spyro the Dragon takes place in the Dragon Realms. It has six Home Worlds, which are accessed in order of Artisans, Peace Keepers, Magic Crafters, Beast Makers, Dream Weavers, and lastly Gnasty's World. With help from the balloonists, Spyro is able to travel between the Home Worlds.