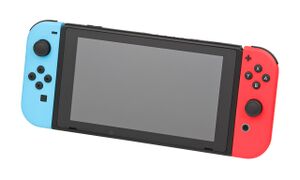 A Nintendo Switch in handheld mode

Spyro's debut for the Nintendo Switch was in Crash Team Racing Nitro-Fueled, since the Spyro N. Friends Grand Prix, which ran from August 30 to September 29, 2019. There is one Spyro game for the Nintendo Switch, Spyro Reignited Trilogy, which released on September 3, 2019, a few days after the Spyro N. Friends Grand Prix began.

Nintendo Switch also has an article on the Crash Bandicoot Wiki!
Retrieved from "https://spyrowiki.com/w/index.php?title=Nintendo_Switch&oldid=1789"
Category: