There are currently 77 stubs. You can help us by expanding these articles! 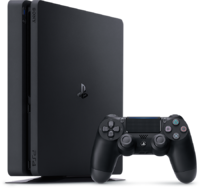 A PlayStation 4 with a controller

Only two Spyro games have been released for the PlayStation 4, the first being a Skylanders game and the second being a Spyro game. Spyro, Hunter, and Gnasty Gnorc are unlockable characters in a Crash Bandicoot racing title.

Three compilations pairing Spyro Reignited Trilogy with a Crash Bandicoot title were released for both the PlayStation 4 and the Xbox One, with only the Crash + Spyro Triple Play Bundle being digital-exclusive.

PlayStation 4 also has an article on the Crash Bandicoot Wiki!
Retrieved from "https://spyrowiki.com/w/index.php?title=PlayStation_4&oldid=1838"
Category: