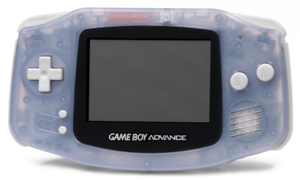 A Glacier model of the original Game Boy Advance

Four Spyro games were released for the Game Boy Advance, one of which was a crossover title with the Crash Bandicoot franchise.

Game Boy Advance also has an article on the Crash Bandicoot Wiki!
Retrieved from "https://spyrowiki.com/w/index.php?title=Game_Boy_Advance&oldid=2224"
Category: