Spyro: Season of Ice is a platformer game for the Game Boy Advance. It was developed by Digital Eclipse and published by Universal Interactive Studios in 2001 and Konami in Japan. The game is an alternative sequel to Spyro: Year of the Dragon, and it would eventually receive two of its own sequels, Spyro 2: Season of Flame and Spyro: Attack of the Rhynocs. Spyro: Season of Ice is the first Spyro game that was not developed by Insomniac Games and the first to have been released for a handheld console.

In the United States, Spyro: Season of Ice sold one million copies during the Game Boy Advance's lifespan.[1] 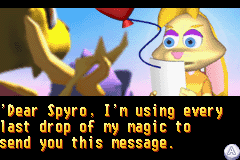 The introduction sequence, in which Bianca reads a letter sent from Zoe.

Spyro and Sparx are on holiday with Bianca and Hunter at the beach. Hunter sees a balloon and panics, mistaking it for a sheep in a flying saucer. On the balloon, Spyro reads a message from Zoe asking for his help because Grendor has been kidnapping fairies. Bianca left her spellbook behind in the library while she was looking for holiday pamphlets. Grendor had been browsing in Bianca's library and came across her spellbook. He tried out a spell, hoping to become a powerful magician, although he accidentally read it upside down and became a two-headed Rhynoc with four headaches. He would then capture every fairy for their wings as an ailment for his headache. Spyro and his friends start their adventure to stop Grendor.

After completing the Winter Fairy Home, Spyro confronts Grendor a first time. Their second encounter is at the end of Spyro's adventure, after he has rescued nearly every fairy. Spyro defeats Grendor again and rescues the last fairy, Zoe. Once free, Zoe lightly chastises Grendor for causing trouble, then uses her magic to remove his extra head and his headaches. Grendor apologizes, and Spyro and his friends return to their vacation.

Season of Ice is set after the events of Spyro: Year of the Dragon. This game was released in November 2001 for Game Boy Advance, one year before the release of the mainline installment Spyro: Enter the Dragonfly for PS2 and Gamecube. Both games are set after the third title, but they are not related to each other. Due to this split, Season of Ice is set in the alternate timeline, along with Season of Flame and Attack of the Rhynocs. 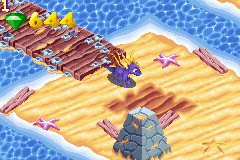 Gameplay screenshot of Spyro in the level, Mermaid Coast.

Spyro: Season of Ice is an isometric platformer, which means that the game is shown from a birds-eye-view. Spyro retains his main abilities from the first three games, including jumping, gliding, hovering, charging, and flaming enemies and objects. Spyro's main goal is to free all the fairies that have been trapped in crystals. If Spyro comes across a trapped fairy, he can melt its crystal using his flame breath.

Spyro starts his adventure in the Autumn Fairy Home, which is the first of the four Fairy Worlds. Every Fairy World is themed after a season, like in Spyro 2: Ripto's Rage!, and have portals that each take Spyro to a certain realm. Some portals cannot be accessed unless Spyro has rescued a minimum of a certain number of fairies. If Spyro has rescued enough fairies, Bianca can break a spell on a portal that leads to the next Fairy World. For the most part, Spyro can freely roam an area, although he must avoid hazardous terrain, such as lava or water, or pitfalls to avoid losing a life. In Fairy Worlds, there are no enemies, and fairy magic protects him from falling into the water. Whenever Spyro jumps or glides above water in a Fairy World, the fairy magic carries him back to the ground.

Sparx returns as Spyro's companion, and as with previous games, Sparx allows him to withstand a few more hits; the number of hits depends on Sparx's color. If Sparx is low on health, Spyro can kill fodder to release a yellow butterfly, which restores a unit of Sparx's health. If Spyro takes a hit without Sparx, he loses a life. The main collectible items are gems, which are scattered around the Fairy Worlds and realms. Sparx also helps Spyro by bringing nearby gems to him. Gems are also hidden in Gem Baskets, vases, and treasure chests, although the latter requires a key to open. Spyro can also obtain a gem by defeating an enemy the first time.

Imprisoned fairies can be found in plain sight, hard-to-reach areas, and some characters in a realm if Spyro helps them with a task. Like the Dragon Eggs in Spyro: Year of the Dragon, the characters often mistake the crystal as something else. Each Fairy World and realm has a fairy which Spyro can find if he uses his flame breath on every flammable object, which is different for each location. If Spyro has defeated every enemy in a realm, a portal back to the Fairy World hub appears.

Each Fairy World has a speedway level. Before starting, the player must select either Normal or Hard difficulty, although both must eventually be completed because a fairy is the reward for completing both. In these levels, Spyro has to move around a long stretching horizon landscape and reach the end within the time limit. Spyro can gain extra time by destroying enemies of a certain color and flying through hoops. At the end of each speedway, Spyro must face a boss or two and defeat them to complete the speedway.

In each Fairy World, Spyro must pay Moneybags a one-time fee to unlock a Sparx level. These levels are shown from a bird's-eye view instead of an isometric perspective. Enemies in these levels consist of killer insects, such as fire ants. Sparx can shoot unlimited blue orbs and use them to attack enemies. After some hits, the enemy is defeated. There are nests which enemies spawn from endlessly, and Sparx can shoot at the nest numerous times to destroy it and stop the enemies from spawning. Some nests are protected by a barrier, which can be disabled if Sparx destroys its corresponding electric panel. There are keys, each of a certain color, and they unlock the gate of the corresponding color, allowing Sparx to progress. In the last room of the level, Sparx has to fight and defeat a large bug, which is the level's boss, to rescue a fairy and return to the Fairy World hub.

If Spyro collects every gem and fairy in the entire game, the Dragonfly X mode is unlocked.

Like the first three PlayStation games, the character designs were redone for the Japanese version to accommodate Japan's market, as shown from cutscenes and talk icons. Another notable difference is that in the Japanese version, every area has their own map, which can be brought up by pressing the Select button. Maps would later become available in all versions of Spyro 2: Season of Flame.

For this subject's image gallery, see Gallery:Spyro: Season of Ice.