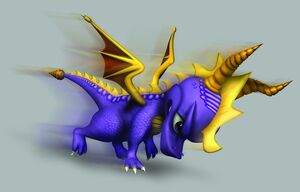 Artwork for Spyro: A Hero's Tail

Charging, also named charge attack, is an ability used by Spyro throughout the Spyro franchise, ever since the first game. It is one of his two main attacks, the other being his flame attack. When charging, Spyro dashes while sticking his horns out in front. He especially uses this attack to defeat enemies who wear metal armor, although he cannot defeat the bigger enemies by charging. Certain objects such as vases can be broken using Spyro's charge attack.

There is a more powerful variation of the charge attack known as the Supercharge.