Spyro: Year of the Dragon

Spyro: Year of the Dragon is the third game of the Spyro the Dragon series. It was developed by Insomniac Games and published by Sony Computer Entertainment. The game was released for the PlayStation in 2000. It is the last Spyro game that was developed by Insomniac. In 2018, the game and the previous two games were remade for Spyro Reignited Trilogy. The original PlayStation version was not released in Japan.

Named for the animal of the Chinese zodiac, Year of the Dragon follows Spyro as he travels to the Forgotten Realm after 150 Dragon Eggs were stolen by an evil sorceress. He travels across thirty different worlds gathering gems and eggs. Upon release, the game received positive critical response; on Game Rankings, Year of the Dragon is one of the top 20 highest-rated PlayStation games of all time.

The game starts with the dragons celebrating the Year of the Dragon, an event that occurs every twelve years where new Dragon Eggs are brought to the realm. During the celebration, a cloaked rabbit girl, Bianca, invades the Dragon Realms with an army of Rhynocs and steals all of the Dragon eggs. Spyro, Sparx, and Hunter go down a hole to find the thieves and recover the Dragon Eggs.

Pursuing the thief, Spyro discovers a realm once inhabited by the dragons, but long abandoned and forgotten, now known only as the Forgotten Realms, ruled by a queen called the Sorceress, and under firm control of an army of Rhynocs. Of the few who defy the Sorceress' rule, the first one that Spyro encounters is a kangaroo named Sheila. She is locked within a cage, but Spyro pay a fee to Moneybags to release her.

As Spyro travels through each realm, acquiring aid from local inhabitants and bartering with Moneybags for passage to new areas, Bianca abducts and imprisons Hunter. It is later revealed that the Sorceress is seeking not the baby dragons themselves, but merely their wings to concoct a spell that can grant her immortality. Once Bianca finds out she feels sorry for the baby dragons, and defects to side with Spyro, Hunter, and the others who defy the Sorceress.

Celebrations resume after the Sorceress' defeat, although Spyro cannot find Hunter. With help from his friends, Spyro eventually locates Hunter out on a date with Bianca and laments about another hero "falling" for love.

It is later revealed that the Sorceress survived her previous battle with Spyro. She is found in the Super Bonus Round, awaiting Spyro on her UFO. The two of them battle again, each in a UFO, above a pool of hazardous liquid. Spyro eventually manages to shoot down the Sorceress, and she drops into the liquid below. After this, it becomes apparent that the Sorceress had the final dragon egg, which hatches a Siamese pair of dragons named Yin Yang. The baby dragons then return to the Dragon Kingdom. 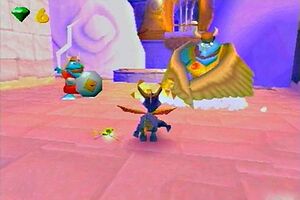 Spyro: Year of the Dragon's gameplay makes few deviations from the previous two games, especially the second game, Spyro 2: Ripto's Rage!. There are four Home Worlds, which are the hub areas, and they have portals that lead to a specific realm. Spyro's main goal is to collect Dragon Eggs, which have been scattered across Home Worlds and realms. These Dragon Eggs are either hidden or are rewarded for completing a certain objective. To proceed to the next Home World, Spyro must complete five realms, have at least a certain number of Dragon Eggs, and the Home World boss.

Gems are another collectible item, and they are abundantly scattered across the Home Worlds and realms. Spyro must obtain these gems to bribe a bear named Moneybags to release a captured critter or to progress further into an area. Each Home World has a critter that Spyro must rescue, and that critter is found in front of a portal leading to a realm in which the player plays as that critter instead of Spyro. The critter must be freed before that level can be accessed.

Spyro has several abilities, including charging, flaming, swimming, gliding, and headbutting. Most of the enemies are rhinoceros-like creatures called Rhynocs, and some are only vulnerable to certain moves. There are Powerup Gates, which Spyro can walk through to receive a powerful ability for a short period of time. During this, a bar at the top-right of the screen shows the time remaining. These abilities could be either a stronger flame, full flight control, or invincibility. Like the previous two games, there are certain areas where Spyro can supercharge, which involves Spyro charging at a rapid speed, allowing him to break certain objects along the way.

Spyro's health is measured by his companion Sparx, a dragonfly who changes color and then disappears after taking progressively more damage. If Spyro is without Sparx and takes another hit, he loses a life and restarts from the previous checkpoint. Spyro can defeat fodder to release a butterfly, which Sparx can eat to regenerate a unit of his health. There are four Sparx levels, one in each Home World, and as their name suggests, the player plays as only Sparx, who is the focus of these levels. Sparx levels are shown from a bird's-eye-view and involve shooter-like gameplay. In these levels, Sparx must collect keys to open gates along the way, shoot several enemies and collect the gems they leave behind, collect keys to open gates, and eat butterflies, some of which grant him a powerup. At the end of each level is a boss that Sparx must defeat to obtain a Dragon Egg. Furthermore, completing a Sparx level unlocks a special ability for Sparx, such as an extra hit point or retrieving more distant gems.

To achieve 100% completion, Spyro must collect all 150 Dragon Eggs and 15,000 gems. In doing so, a secret world known as the Super Bonus World is opened. It has several gems and features harder variations of minigames from previous realms. 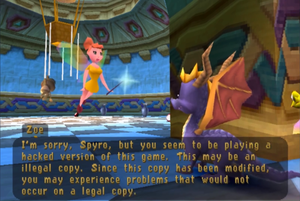 Spyro: Year of the Dragon has two layers of copy-protection: one to detect a PlayStation modchip, in which case the game stops playing, and another to detect attempts at bypassing the first copy protection method. In the latter's case, the game plays normally for a few levels up until Spyro talks to Zoe at the balloon. She breaks the fourth wall by informing him that he is playing a hacked version of the game. From this point on, various changes occur during gameplay, specifically done to make the gameplay more frustrating and difficult for the player.

Several of the changes occur in random parts of gameplay, such as Spyro losing Dragon Eggs that he had collected, gems vanishing from levels, and portals, balloons, and rockets taking Spyro to a random location. In European versions, the game's language also changes randomly. Sparx's color remains green, so his health cannot be increased. An exception is if Spyro gets an extra life without Sparx accompanying him, in which case Sparx returns at full health. Whenever Sparx eats a butterfly, he disappears. Moneybags charges Spyro more than once to access the critter levels, even if they have already been unlocked. Lastly, during the final boss, the game suddenly exits back to the first world, Sunrise Spring Home. When this happens, Spyro's entire progress is erased, forcing him to restart his adventure.[1]

The critters are a group of four characters, one in each Home World, that have been imprisoned for defying the Sorceress, and are guarded by Moneybags. Spyro can bribe Moneybags with gems to release a critter of the Home World he is in. The critters each have their own playable levels. In each boss battle, a certain critter aids Spyro. The critters are featured in various missions and minigames, many of which are only accessible from a Challenge Portal.

There are four Home Worlds, and each are named after a time of day. The later ones have more dangerous environmental obstacles, although none of them have enemies. Each Home World has four realms, a Sparx level, a protestor level, and a Speedway level.

All four Home Worlds have 400 gems; the first three also have 5 Dragon Eggs, but Midnight Mountain Home has 6 Dragon Eggs.

For this subject's image gallery, see Gallery:Spyro: Year of the Dragon.