It has been requested that this article be rewritten and expanded to add information on each fodder's level appearances. 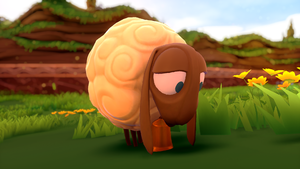 A sheep, the most common type of fodder, as they appear in the Spyro Reignited Trilogy remake of Spyro the Dragon

Fodder is the name for the various small creatures found within the realms and homeworlds in the Spyro franchise. They first appear in Spyro the Dragon. During gameplay, the sole purpose of fodder is to be defeated by Spyro, upon which the fodder releases a butterfly that Sparx can eat to replenish his health if he is not yellow. When Spyro leaves an area where he killed a fodder and later re-enters it, he can re-encounter the fodder. Sheep and frogs are the most common and recurring type of fodder, the former being the only fodder to appear in every main series Spyro game.

Starting in Spyro 2: Ripto's Rage!, an extra life is granted for every ten butterflies that Sparx eats.