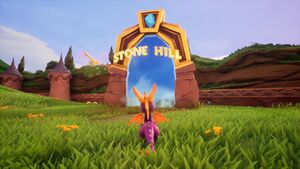 Portals are objects in several Spyro games that allow Spyro to access other realms. Portals first appear in the first game, Spyro the Dragon. Many portals are an arch that displays the sky of the realm it links to. The preview is shown from the front and back of the portal, which can be entered from either side. Portals that are attached to a wall can only be entered from the front. Some portals cannot be activated unless Spyro has met a certain condition, such as collecting a minimum number of gems that are required to enter. In the three PlayStation games, every portal has gold letters that spell out the name of the realm it leads to. At the end of a level is an exit portal, which leads back to the hub area.

Whenever Spyro enters a portal, a loading screen is shown in which Spyro is gliding to the realm, or vice versa if he enters an exit portal, and the game autosaves. If Spyro has collected gems, they are added to his treasure total, or if he has not collected any, only his total amount of collected treasure is shown.

In Spyro: Year of the Dragon, every portal found in the homeworlds are based on the structures found in the respective realms.