From the Spyro Wiki, the Spyro and Skylanders encyclopedia
(Redirected from Spyro & Friends Grand Prix)
Jump to navigationJump to search 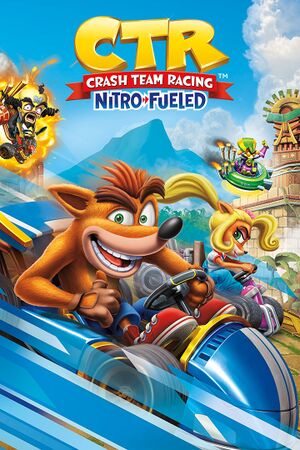 Artwork used for the box art

Crash Team Racing Nitro-Fueled is a kart racing game of the Crash Bandicoot franchise. It was released for the PlayStation 4, Xbox One, and Nintendo Switch on June 21, 2019.

Content from the main Spyro the Dragon series was added into the game with the introduction of Spyro N. Friends Grand Prix, which ran from August 30 to September 29, 2019. It introduced three playable characters, Spyro, Hunter, and Gnasty Gnorc, the latter two being unlockable. Each character was given a kart, the Spyromobile, Dragonfly, and Gnasty Ride respectively. The Grand Prix also introduced a course, the Spyro Circuit. Since the Winter Festival Grand Prix, all content introduced in the Spyro & Friends Grand Prix (except the Champion Decal) would permanently be readded into the core game itself.

Crash Team Racing Nitro-Fueled also has an article on the Crash Bandicoot Wiki!