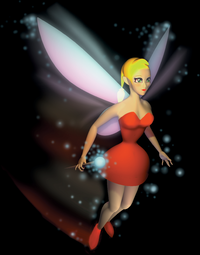 Artwork of a Red Fairy from Spyro the Dragon

Fairies are magical creatures who commonly assist Spyro in his journeys throughout the Spyro franchise. Fairies debut in the first game, Spyro the Dragon. The most notable and recurring fairy is Zoe, who is one of Spyro's main allies.

In Spyro the Dragon, there are a few types of fairies, all of whom assist Spyro along his journey. The three main types are:

Furthermore, in Lofty Castle, there are fairies who activate whirlwinds for Spyro to use.

In Spyro 2: Ripto's Rage!, Zoe was introduced, and she replaces the role of Red Fairies from the first Spyro the Dragon game.

In Spyro: Year of the Dragon, fairies once again have a large role, and assist Spyro in finding the Dragon Eggs. Zoe reappears from Spyro 2: Ripto's Rage!, and two fairies are introduced: Isabella and Princess Ami.

The fairies live in a realm named Charmed Ridge, which is governed by Princess Ami. When Spyro visits there, he learns that the Cat Wizards have invaded the fairies' castle and captured Princess Ami. Fairies along the way help Spyro in his quest to rescue Princess Ami.

In Spyro: Season of Ice, fairies play a role in the main plot. Grendor has frozen all of the fairies, and Spyro goes on an adventure to rescue them. In the hub world, if Spyro jumps or glides above the surrounding water, fairy magic redirects him back onto the ground. This is similar to the Yellow Fairies from Spyro the Dragon. There are four types of fairies, and each type is colored after one of the seasons: spring, summer, autumn, or winter.

In Spyro 2: Season of Flame, fairy magic in the hub world once again protects Spyro from falling into the water. Unlike Spyro: Season of Ice, Spyro can glide above the water, and the fairy magic only rescues him if he is about to touch the water surface.