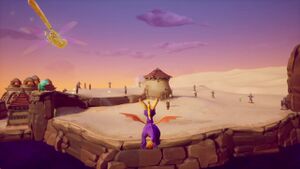 Gliding is one of Spyro's main abilities in every Spyro game. It allows Spyro to travel across wide gaps and reach distant areas. In order to glide, Spyro must first jump in midair. The gliding distance depends on the altitude from where Spyro has jumped. Some gaps are slightly too wide for Spyro to glide across, so just before reaching the end of one, Spyro can hover to gain a little more distance, allowing him to land onto the platform in front of him. In general, hovering causes Spyro to stop gliding.